The massive computing power of the brain depends on the insulation of nerve cell connections with a fatty or myelin sheaths, by cells known as oligodendrocytes (OLs). Bundles of these ‘myelinated’ connections form the white matter that is very prominent in the human cortex. Although a loss of cortical white matter and myelin has been documented in dementia, the causes are unknown. 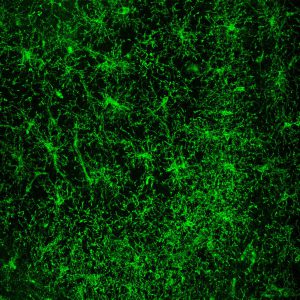 There is evidence that OLs are continuously lost and regenerated from a pool of OL progenitors (OPs). It is proposed that OL regeneration may be decreased in dementia, resulting in accelerated myelin loss. OL regeneration is believed to depend on specialised contacts, synapses, formed by OPs with nerve cells. Disruption of signalling is known to occur in Alzheimer’s disease (AD) and might therefore disrupt OP regeneration of OLs, resulting in loss of myelin and cognitive decline. In this project, in collaboration with Prof. Butt (University of Portsmouth) and Prof. Perry we aim to analyse the influence of neuronal signalling on OP regeneration and OL/myelin loss, in human AD tissue and in the APP/PS1 mouse model of AD. This will provide new knowledge on an important but neglected component of AD pathology and identify potential cellular targets for protecting myelin and preserving cognitive function.