Microglial and astroglial cells play a key role in the development and maintenance of this inflammatory response, showing enhanced proliferation and morphological activation. We are using a multidisciplinary approach combining the study of  laboratory models of chronic neurodegeneration, including prion disease, Alzheimer’s disease (AD) and ALS, with the study of post-mortem samples from patients, to describe the time-course and regulation of microglial proliferation.

Our results demonstrate that microglial proliferation is an important feature of the evolution of chronic neurodegenerative disease, with direct implications for understanding the contribution of the CNS innate immune response to disease progression.

We have shown that the control of microglial numbers in prion, AD and ALS is regulated by the activation of the Colony Stimulating Factor 1 Receptor (CSF1R). Pharmacological inhibition of CSF1R leads to a diminished proliferation of microglia and the amelioration of the behavioural and neuropathological symptoms of chronic neurodegeneration. Together with Prof. Perry, we are currently partnering with several industrial colleagues to aim to translate these findings into the clinical setup as soon as possible. 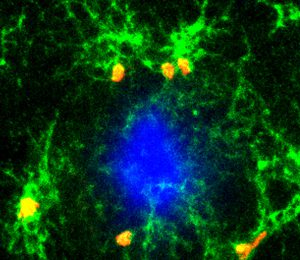